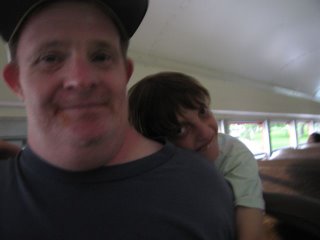 Today we all slept an hour later than usual and rang the bell for wake up at 8:30. This rest was very welcome since we’d stayed up late the night before and then marched and danced our way through Edgartown on the 4th. The morning was spent at art and video classes. The art class made a huge “Happy Birthday” banner for Faith and we sang happy birthday for her as well. In fact, we sang that song for her at least five times over the course of the day.

By lunchtime clouds started to roll in and rain began pouring down before the meal was over. So we decided to watch a movie together down in the studio. Jeff hooked a projector up to DVD player and we watched “The Chronicles of Narina” while eating popcorn and making loud comments about the events on screen. “Look out for the wolves!”

We had a nice surprise visit from Chad and Sybil before dinner and Chad played us a few songs, including one called “Right Me Up” which was written about our own Manny Furtado here at Camp Jabberwocky. We did a few sing along numbers as well, including “Amazing Grace”. Here he is singing his heart out with Nancy Jesseau. Thanks Chad! 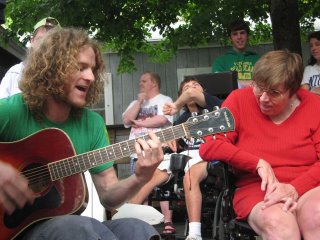 The Mimsey gang went out to Lola’s to celebrate Faith’s birthday and it was reported that they did a lot of dancing afterwards. The rest of us ate here and then went to Community Sing at the Tabernacle. That was fun. We sang “Bingo” and “America the Beautiful” and the song leader asked if it was anyone’s birthday and David raised his hand so the whole place sang for him. His birthday isn’t until September, but he explained that he wanted everyone to sing to him now since we might not be around on the actual day. Here’s Jackie and Sharon at the Tabernacle: 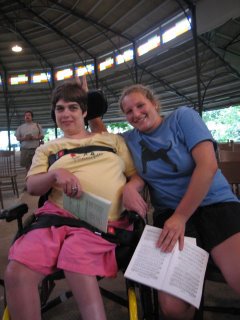 Sharon is a new camper who arrived on Monday. She is legally blind and her mother had been trying to find a spot for her at Jabberwocky for eight years. Every year she would call up to see if there was any room, and this year she finally heard the answer “yes!”. She was very excited about this. Jackie is a pre-med student from Georgia. She’ll be filling out med school applications soon and she said working here has provided her with a lot of great material for those med school essays. Hey, that’s what we’re here for!

This is Matt sitting inside the Tabernacle. He’s a new camper from Acton, Mass. He’s been very patient with us as we read the long list of instructions his parents sent over and try to figure out basic things like how to put him to bed. He just laughs when we do something wrong, like brush his teeth with his skin cream. Just kidding! We didn’t do that. Not yet anyway. Thanks for joining us Matt! 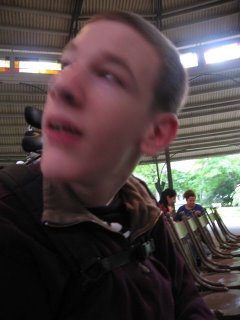 Tomorrow we get up early for a big sailing trip on the giant catamaran Mad Max! Everyone aboard! Oh yeah!