Well, the day we have been waiting for has arrived. And it was sunny too! It was certainly a thrill to arrive in Woods Hole and see all the happy faces waiting to travel back to the island. We hugged our old friends and said hello to the new ones and then we hopped on board the ferry. Back in Vineyardhaven the counselors had raided the costume cabin and were waiting for us looking like this: 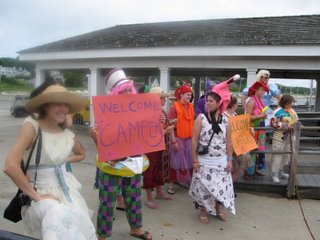 We had almost all of the campers up on the deck waving hello including Faith Carter, Nancy Connelly and Melissa Pepper. Everyone cheered when Bruce Dodson rolled down the gangway. As we all got aquainted the other passagers at the landing cheered for Camp Jabberwocky and then we all walked together through town and up to camp. 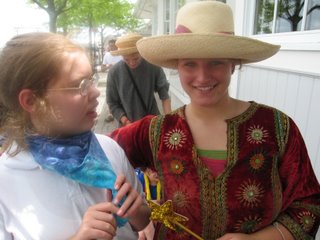 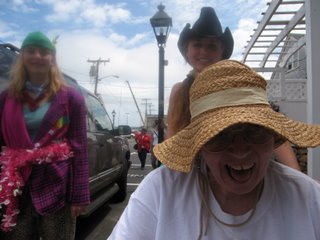 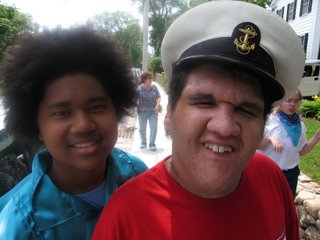 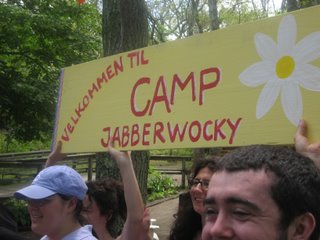 Back at camp we unpacked our bags and eventually made it down to lunch. The meal was great and we heard some fine stories from some of the new campers. 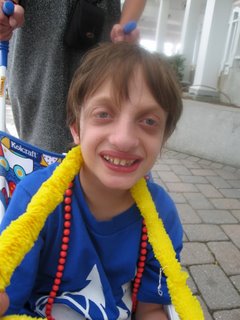 David Gordon, a little fellow with Wolf-Hirschhorn Syndrome, established himself as speaker of the house right away. He told a story which began “Once upon a time there was a boy who wanted to go to camp…” 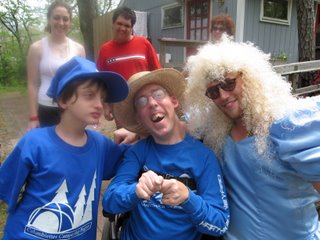 After lunch we had a short rest and then loaded up the big red bus for a trip to the beach. This was quite a challenge since we had so many new folks, both campers and counselors. But we figured out the puzzle and didn’t drop anyone too far, or at least not on their heads. We got the bus and vans moving in about 45 minutes which wasn’t bad considering it all, but from now on we’re detirmined to cut that time down to under a minute by the end of camp. That’ right, everyone on the bus in under a minute, maybe even 30 seconds. 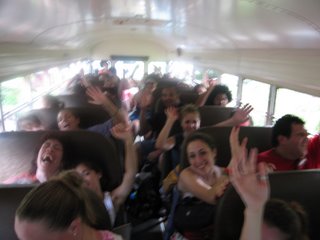 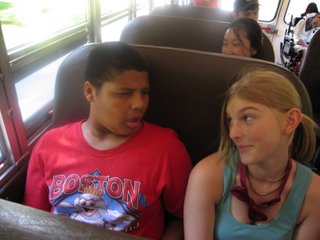 Anyway, we got to the beach and it was a beautiful evening. We ate hot dogs and burgers cooked by Jeff on the grill. The drummers came down and so did all the colorful people from the island and some of us danced while others just talked and watch the sun get low. Skipper Brooks tapped some hot rythms on the skins while David G. hopped about saying “I’m so happy!”. On the way home people on the sidewalks waved as the bus drove through Oak Bluffs. It was a fine time. 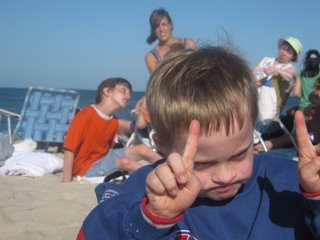 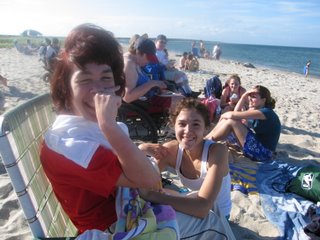 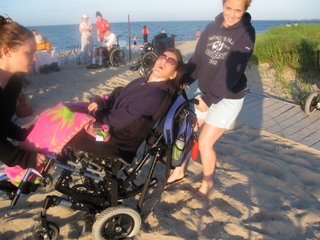 We arrived back at camp sandy and content and everyone clambered around taking baths and showers and the new counselors tried to figure out how it is we’re supposed to do all this stuff. Somehow it all got done and nobody took the wrong meds and as far as we know we didn’t lose any campers or forget anyone on the ferry. Yes, the first day is over now, and we’re looking forward to many more like it to come… 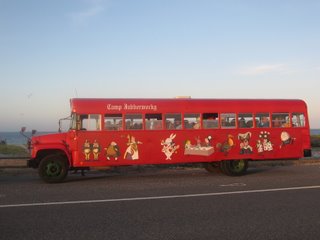 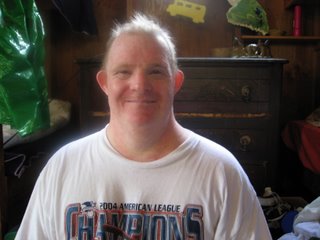