Hello and welcome to the news from Camp Jabberwocky in July. We are all excited because tomorrow morning the campers finally arrive. But first, let us tell you about “set-up week”…

We were all a little nervous since this is such a different year at Camp Jabberwocky. Our beloved director Gillian has moved on and almost all of the counselors this summer are brand new. This is a different camp, to be sure, but we are here to report that so far things are going really well. Set-up week turned out to be a lot of fun for us. We dubbed this year “The Year of the Caterpillar” because the little creatures munched up most of the tree leaves and the cabins and buildings were covered with their fuzzy bodies. We swept and sprayed them off, but there are still a few stragglers hanging around. Sometimes they fall in our hair, but that’s okay.

The new counselors are an excellent group. Here’s a picture of some of them: 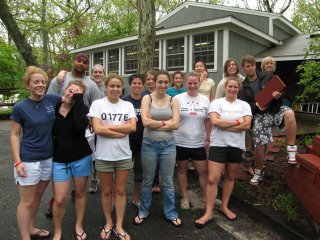 They’ve come from far and wide ready to work and happy to learn about the camp we all love. At first we had a lot of trouble meeting their ferries on time. We’d show up at the wrong boat, or wrong dock and then eventually the counselor would call or wander up the path having found the camp on her own. We were all excited about the arrival of “The Swedes”, a man and woman from Sweden, we were told, who had worked with people in that faraway land. We weren’t sure if they were a brother or sister or husband and wife, or maybe two men or maybe two women. It turned out they were a boyfriend and girlfriend, and not from Sweden at all. They are Danes! But we call them “The Swedes” anyway. Julius showed up wearing five hats on his head, and his girlfriend Mika has a nice big smile. Later on another couple arrived, a pre-med student named Jean, and her boyfriend Tyrone who is 6 foot 4 and 260 pounds. He played footbal at Colgate University. There is nothing he cannot lift. Here he is carrying some bricks: 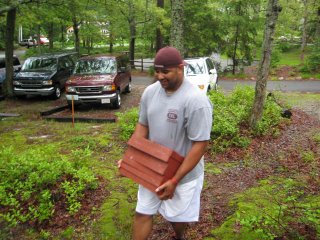 We cleaned and cleaned all week and old counselors came by and showed the new counselors how to load the bus with wheelchairs and how we do our laundry and how we toss campers in bed at night and all the things which are done a little differently here. Rob Gale, a longtime camper, came by to help show us how to load the red bus. And Rick Baussman led us all in a drum circle jam. We learned this song about liking pizza, all kinds of pizza.

We’re going to do horseback riding this year too, at a new barn. We learned that if you are leading a horse and you put the lead close to your neck you might get beheaded. It doesn’t happen very often. Only once and a while. So we’ll be careful about that. Here’s Madeline mezmorizing the group with her wisdom at an evening meeting: 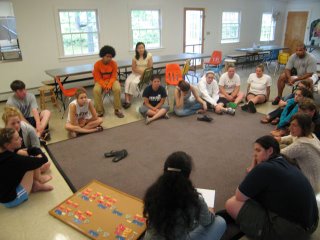 We had a cookout at the beach and Julius tried to catch a seagull with a piece of hotdog on a string. “We eat these birds in Denmark,” he explained. “very tasty”. He was unsuccessful but we enjoyed watching the hunt anyway.

Everyone who comes must tell a story to the group, and we’ve heard some good ones. Grace, who’s father is a Baptist minister from Korea, told us about how she got a tumor in her eye from UV lightbulb in China. She’s okay now though. Vera told us why she is currently taking rabies shots (she broke up a fight between her dog and a raccoon). She’s not contagious though. At least we don’t think so. There is only a 1 in 5 chance she will turn into a furry animal before the end of camp.

Anyway, we’ve learned a lot about eachother and the camp is now in good shape for the arrival of the campers. Madeline has been making lots of lists and Jeff is running around with boxes and bags, and laughing all the time. Kim Ho showed up and helped us get the computers in gear and gave us some advice which we’ve all by now forgotten. J. Wo and Mandy stopped by and told us stories about wiping butts and putting wet laundry in the freezer. We have a nice new cook who used to live in Anglia and her son Teak has the coolest hair of anyone here. He looks like he was electrocuted, but in a good way.

This morning after lunch we got together and moved a ton of bricks. It didn’t take us that long because we all pitched in. It’s been raining for days, but perhaps we’ll have sunny skies tomorrow, when the much anticipated campers arrive. We’ve got 22 campers coming, 12 in wheelchairs, 10 who can walk. About 2/3 of them are new! We’ll be relying on the old timers to show them the ways.

Thank you to everyone who has come by and helped us out. And thank you to the nice people who have called to say “we wish you well…” It means a lot! We’ll keep you posted on the adventure ahead…